New surgery could end the need for reading glasses

Millions of Britons who suffer from long-sightedness could now have their vision fully restored following groundbreaking treatment.

With an estimated 23 million experiencing partial difficulty with their ability to see, new procedures could now end the need for reading glasses.

Four million patients are now expected to have the operation over the next decade with the practice set to be made available to private patients as of tomorrow, which costs £2,800 for one eye and £4,600 for the pair. 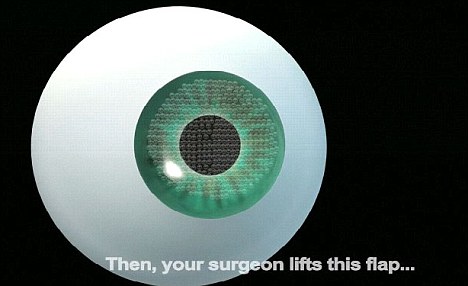 The technique, developed by scientists, sees a microscopic ring placed in the cornea, which in turn allows only focused light to reach the retina, and subsequently improves vision for all distances.

More than 6,000 treatments have been carried out since last year in Europe and certain parts of Japan.

Dr David Allamby, an ophthalmologist is delighted with the progress in the attempt to cure impaired vision.

He said: Finding a treatment for presbyopia is important.

'As we age, the crystalline lens, which sits behind the cornea and acts like a zoom, stiffens from a squashy gel-like substance to a fixed structure.

'This makes it harder for muscles to squeeze it into shape to get a clear image.

'Most over-45s will know that feeling: suddenly struggling to read menus or maps, but our longer sight for driving, say, remains good.

'The only people who still read easily are those who were born short-sighted, but who already use glasses for distance.

'This is like granting immunity from ageing, at least for your eyes.'

Scientists have been monitoring a number of patients who six years ago were amongst the first to undergo the operation.

And results from the implants have shown no signs of any problems.

However warning signs have been raised for those over 70 who might be keen on the procedure.

Furthermore, chairman of the Royal College of Ophthalmologists, Larry Benjamin was sceptical, insisting:

'This is an interesting concept. But it won't suit everyone and I imagine certain professionals such as pilots, where night vision is important would not be allowed it.'

In the UK, Londoner Theresa Ferguson, 53, became the first Brit to undergo the procedure last month.

And she has spoken of her delight with the routine surgery saying: 'I had brilliant eyesight until I was 45. Then I began struggling. I need to read small print for work.

The health worker then described the immediate improvement in her vision.

'I was nervous, but it was painless, although uncomfortable. It took 15 minutes.'

The technique, developed in California cost $70 million in order to perfect, before being recently made available to the public worldwide.