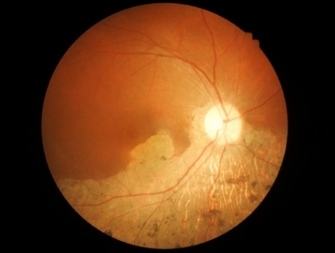 The researchers hope their study will help develop new treatments for progressive diseases that damage the retina, such as age-related macular degeneration.

Cell reprogramming discovery may lead to treatments for eye diseases

Using cell reprogramming techniques, scientists have managed to induce support cells in the retina to become stem cells capable of making new neurons. They suggest the technique could lead to new treatments for glaucoma, macular degeneration, and other eye diseases where retinal neurons are lost.

The researchers, led by Bo Chen, an associate professor of ophthalmology at Yale University School of Medicine in New Haven, CT, report their work in the journal Cell Reports.

The retina at the back of the eye contains many types of cell, including the retinal neurons that process visual images and help us to see, and support cells called glial cells.

The most common type of glial cell in the eye of mammals is the Müller glial (MG) cell. These cells give structural support and also help keep the chemical environment of retinal neurons stable.

MG cells have the capacity to become stem cells, proliferate, and turn into new neurons. However, the researchers explain how recent studies suggest that, in mammals, this ability is only switched on through injury, otherwise it remains dormant.

In cold-blooded creatures such as zebrafish, this is not the case. Their MG cells act as a source of retinal stem cells to replenish lost retinal neurons.

Researchers are keen to find a way to activate MG cells in the mammalian eye so they behave more like the ones in zebrafish. Previous studies have shown that trying to induce retinal injury through neurotoxins is a counterproductive approach as it results in death of neurons.

Thus, as Prof. Chen and colleagues note, "An injury-free strategy that would not necessitate inflicting further damage to a diseased retina is highly desirable."

For their investigation, the team focused on a Wnt signaling pathway that is activated by injury in MG cells.

By inserting genes into adult mouse retinas, they found they could reprogram MG cells to activate Wnt signaling and induce MG proliferation without retinal injury.

The authors also describe how - by inserting and deleting particular genes - they could manipulate signaling upstream and downstream of this pathway to influence effects on MG proliferation.

They note: "Deletion of GSK3β resulted in β-catenin stabilization and MG proliferation without retinal injury," and that, "Intriguingly, after gene transfer of β-catenin or Lin28, a subset of cell-cycle-reactivated MGs express markers for amacrine cells, a type of retinal interneurons."

They conclude their results show that a particular pathway - called Wnt-Lin28-let7 miRNA signaling - plays a key role in "regulating proliferation and neurogenic potential of MGs in the adult mammalian retina."

"In the future we are hoping to manipulate these cells to replenish any lost retinal neurons, either in diseased or physically damaged retinas. Potentially, it's a therapy to treat many different retinal degenerative diseases."

AMD is the leading cause of permanent impairment of reading and fine or close-up vision among people aged 65 years and older in the United States.

Estimates from the Centers for Disease Control and Prevention (CDC) suggest around 1.8 million Americans aged 40 and over are affected by AMD, and another 7.3 million are at risk of AMD because of a condition called "large drusen." Drusen are tiny yellow or white deposits under the retina.

More in this category: « Shaping The Future
Login to post comments