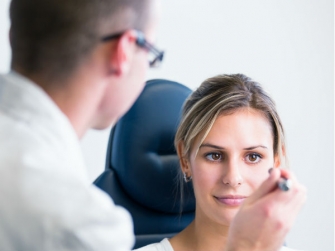 Age-related vision loss is common and devastating. But new research suggests that physical activity might protect our eyes as we age.

There have been suggestions that exercise might reduce the risk of macular degeneration, which occurs when neurons in the central part of the retina deteriorate. The disease robs millions of older Americans of clear vision. A 2009 study of more than 40,000 middle-aged distance runners , for instance, found that those covering the most miles had the least likelihood of developing the disease. But the study did not compare runners to non-runners, limiting its usefulness. It also did not try to explain how exercise might affect the incidence of an eye disease.

So, more recently, researchers at Emory University in Atlanta and the Atlanta Veterans Administration Medical Center in Decatur, Ga., took up that question for a study published last month in The Journal of Neuroscience. Their interest was motivated in part by animal research at the V.A. medical center. That work had determined that exercise increases the levels of substances known as growth factors in the animals’ bloodstream and brains. These growth factors, especially one called brain-derived neurotrophic factor, or B.D.N.F., are known to contribute to the health and well-being of neurons and consequently, it is thought, to improvements in brain health and cognition after regular exercise.

But the brain is not the only body part to contain neurons, as the researchers behind the new study knew. The retina does as well, and the researchers wondered whether exercise might raise levels of B.D.N.F. there, too, potentially affecting retinal health and vision.

To test that possibility, the researchers gathered adult, healthy lab mice. Half of these were allowed to remain sedentary throughout the day, while the other animals began running on little treadmills at a gentle rodent pace for about an hour a day. After two weeks, half of the mice in each group were exposed to a searingly bright light for four hours. The other animals stayed in dimly lit cages. This light exposure is a widely used and accepted means of inducing retinal degeneration in animals. It doesn’t precisely mimic the slowly progressing disease in humans, obviously. But it causes a comparable if time-compressed loss of retinal neurons.

The mice then returned to their former routine — running or not exercising — for another two weeks, after which the scientists measured the number of neurons in each animal’s eyes. The unexercised mice exposed to the bright light were experiencing, by then, severe retinal degeneration. Almost 75 percent of the neurons in their retinas that detect light had died. The animals’ vision was failing.

But the mice that had exercised before being exposed to the light retained about twice as many functioning retinal neurons as the sedentary animals; in addition, those cells were more responsive to normal light than the surviving retinal neurons in the unexercised mice. Exercise, it seems, had armored the runners’ retinas.

Separately, the researchers had other mice run or sit around for two weeks, and then measured levels of B.D.N.F. in their eyes and bloodstreams. The runners had far more. Tellingly, when the scientists injected still other mice with a chemical that blocks the uptake of the growth factor before allowing them to run and exposing them to the bright light, their eyes deteriorated as badly as among sedentary rodents. When the mice could not process B.D.N.F., exercise did not safeguard their eyes.

Taken together, these experiments strongly suggest that “exercise protects vision, at least in mice, by increasing B.D.N.F. in the retina,” said Jeffrey Boatright, an associate professor of ophthalmology at Emory University School of Medicine and a co-author of the study.

But obviously, mice are not people, so whether exercise can prevent or ameliorate macular degeneration in human eyes is “impossible to know, based on the data we have now,” said Machelle Pardue, a research career scientist at the Atlanta Veterans Administration Medical Center, who is the senior author of the study. She and her colleagues are trying to find ways to determine the impact of exercise on human eyes. But such experiments will take years to return results.

For now, she and Dr. Boatright said, people who are concerned about their vision, and especially those with a family history of retinal degeneration, might want to discuss an exercise program with their doctor. “As potential treatments go,” she said, “it’s cheap, easy and safe.”

Dr. Boatright agreed, adding that eye researchers have been trying for some time to find a way to externally deliver growth factors or drugs to aging eyes, but the available methods typically involve injections into the retina, a process that is complicated, chancy, pricey, and fundamentally objectionable.

Now, though, “it’s beginning to look like we may have this other method” — exercise — “that costs almost nothing and results in you making your own growth factors, which is so much safer and more pleasant than having a needle stuck into your eyeball,” he said, getting no disagreement from me.